Registrations Open for India’s first Rail & Transportation University focused on creating the next generation of leaders for the transport sector. 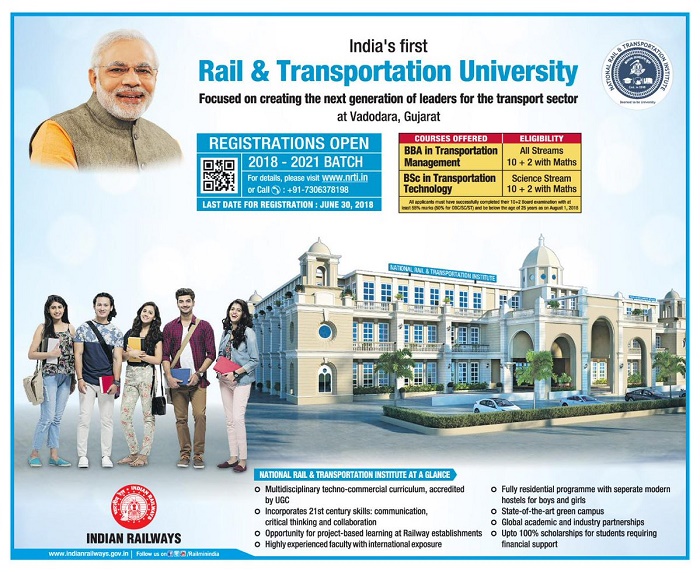 Give a Missed Call on 9711855005 to support International Day of Yoga. The countdown has begun for IDY-2018. Make your plans now. Make sure you are there.

Yoga is an invaluable gift of ancient Indian tradition. The word “Yoga” is derived from the Sanskrit root yuj meaning “to join”, “to yoke” or “to unite”, symbolizing the unity of mind and body; thought and action; restraint and fulfillment.

It represents a holistic approach to health and well-being. Yoga is known for disease prevention, health promotion and management of many life style related disorders. Recognizing its universal appeal, on 11th December 2014, the United Nations General Assembly (UNGA) passed a resolution (resolution 69/131) proclaiming 21st June as the International Day of Yoga (IDY).

PURPOSE OF THE AWARDS
Shri Narendra Modi, Prime Minister of India, on the second International Day of Yoga announced two Yoga awards – one International and other National. The purpose of the Award is to recognize and felicitate individual(s)/ organization(s) who have made significant impact on the society for a sustained period of time by way of promotion and development of Yoga.

Train No.12875 Puri-New Delhi Neelachal Express starting from Puri with effect from 22nd May 2018 onwards will go to Anand Vihar Terminalinstead of New Delhi Station on its scheduled days.

Train No.12876 New Delhi-Puri Neelachal Express from New Delhi will originate from Anand Vihar Terminal instead of New Delhi Station with effect from 25th May 2018 on its scheduled days.

The timings and stoppages for 12875/12876 Puri-Anand Vihar Terminal (New Delhi)-Puri Neelachal Express between Puri and Ghaziabad will remain unchanged.

Train No.12815 Puri-New Delhi Nandankanan Express starting from Puri with effect from 21st May 2018 onwards will go to Anand ViharTerminal instead of New Delhi Station.

Train No.12816 New Delhi-Puri Nandankanan Express from New Delhi will originate from Anand Vihar Terminal instead of New Delhi Station with effect from 23rd May 2018 on its scheduled days.

The timings and stoppages for 12815/12816 Puri-Anand Vihar Terminal (New Delhi)-Puri Nandankanan Express between Puri and Aligarh will remain unchanged.

Mumbai Central-Ahmedabad Duronto Express extended upto up to Rajkot from 27th May, 2018 for the convenience of passengers. Booking for extended trips starts from 26th May, 2018 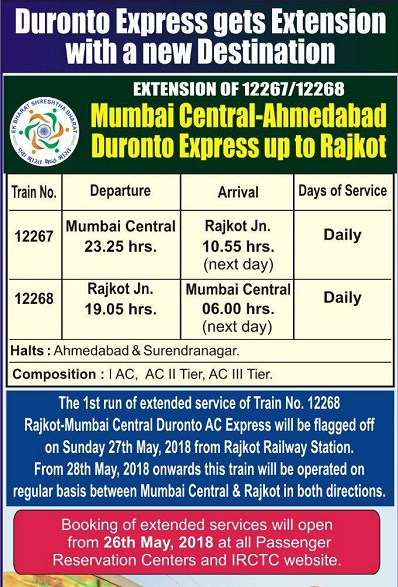