Ministry of Railways has decided to introduce new weekly Mahamana Express train between Indore and Veraval for the benefit of passengers especially the pilgrims visiting the holy temple towns of Mahakal & Omkareshwar in Madhya Pradesh and Somnath in Gujarat.This train will be flagged off by Smt Sumitra Mahajan – Hon’ble Speaker of Lok Sabha in a function to be held at Indore station on 29th June, 2018.

According to a Press Release issued by Shri Ravinder Bhakar – Chief Public Relations Officer, Western Railway, Train No. 09320 Indore – Veraval Mahamana Express will run as special inaugural train on Friday, 29thJune 2018 at 17.00 hrs from Indore station and will reach Veraval next day on Saturday, 30th June, 2018 at 13.30 hrs. Similarly, in the return direction Train No 09319 Veraval – Indore Special Mahamana Express will leave from Veraval at 18.30 hrs on Saturday, 30th June, 2018 to arrive Indore at 13.45 hrs the next day.

In its regular run, Train No. 19320 Indore – Veraval Mahamana (Weekly) Express will depart from Indore every Tuesday at 22.25 hrs to reach Veraval at 18.05 hrs the next day.

Similarly, in the return direction, Train No. 19319 Veraval – Indore Mahamana (Weekly) Express will depart from Veraval every Thursday at 08.45 hrs to reach Indore at 04.55 hrs the next day. Regular run for the above trains will commence with effect from 03/07/2018 Ex Indore and with effect from 05/07/2018 Ex Veraval.

This train will have AC 2 tier, AC 3 tier, Sleeper and General Class coaches. The train will halt at Dewas, Ujjain, Ratlam, Godhra, Ahmedabad, Surendranagar, Wankaner & Rajkot stations in both directions.

The satellite city of Bahadurgarh in Haryana is all set to get Metro connectivity with the completion of work on the 11.183 kilometre long Mundka – Bahadurgarh Metro corridor. This section will be Delhi Metro’s third connectivity to the neighbouring state of Haryana. Metro Services are already operational in the Gurugram and Faridabad cities of Haryana now. This entirely elevated section will not only connect the capital city with Bahadurgarh but will also provide connectivity to many outer Delhi areas of the western fringes of the city such as Mundka, Ghevra, Tikri Kalan etc. and with the opening of this section, the Delhi Metro network will expand to 288 kilometres with 208 Metro stations.

The main highlights of this section are as follows:

The Mundka – Bahadurgarh section will be extremely crucial from the point of view of connectivity of the city of Bahadurgarh as well as parts of West Delhi. Bahadurgarh is an upcoming urban settlement which has many industrial units. Similarly, Mundka also has an industrial area where many people travel  every day for their professional requirements. This corridor will be of help to these people.

Bahadurgarh is a bustling urban settlement in the Jhajjar district of Haryana with a population of about one lakh and seventy thousand people. The Bahadurgarh Industrial Area houses many industrial units and is a source of employment for lakhs of people who travel there from Delhi.

Besides, Bahadurgarh has also developed into an educational hub and houses many universities and colleges. Many students travel to these institutes from Delhi every day. This connection will be of great help to them also.

Many areas of Outer Delhi in the western parts of the national capital will be benefitted. The Mundka Industrial Area also has many industrial units. This apart the localities of Ghevra, Tikri Kalan will be connected by the Metro for the first time.

The Bus Stand Metro Station in Bahadurgarh has seamless connectivity with the interstate bus terminal which provides connectivity to other areas in Haryana.

Engineering and other Challenges:

Moreover, there was huge traffic congestion on the south side of the station due to the bustling Bahadurgarh bus stand. Due to the congestion, it was impossible for DMRC’s engineers to divert the traffic running on both sides of the median and prepare scaffolding for spanning the carriageway to allow traffic below it.

The facade of the Mundka Industrial Area station of the corridor has been decorated with beautiful terracotta designs. All the other stations also have a bright and vibrant colour scheme with bright yellow pillars on the platforms. The lifts also have been done in eco-friendly red terracotta tiles at all the station which are giving a vibrant look to the structures. The roof tops of the elevated stations have also been redesigned for better aesthetics.

DMRC is committed to provide environment friendly Metro system and as part of this endeavour, DMRC is installing Solar PV power plants at various locations in existing as well as upcoming DMRC metro corridors. Efforts are made to integrate solar PV power plants at construction stage itself in the upcoming network of DMRC. All the roof-top solar plants are being installed under RESCO model, till date 23 MWp capacity has already been commissioned in the DMRC network.

In Bahadurgarh Depot, Roof Top Solar Plants with total capacity of 783 kWp has been installed under RESCO model, which is spread over 7 different roofs. It is estimated to generate 1 million Unit of energy per annum, (i.e.approx. 2,800 Units per day), which will be adequate to meet the day time auxiliary energy requirement (i.e. lighting, air conditioning, etc.) of the Depot.

Further, work to install additional 700 kWp capacity, solar plants on the roofs of 7 stations of Mundka – Bahadurgarh corridor will commence shortly, for which the developer has been finalised. Energy generated from these plants will be adequate to meet the entire day time auxiliary load of these stations.

All the seven stations of the Line-5 extn. (Mundka – Bahadurgarh corridor)are equipped with the latest energy efficient equipment / systems, such as LED lighting, Regenerative Braking in Lifts, VRV Air conditioning, etc. All these stations have been rated as platinum by the Indian Green Building Council for adherence to green building norms.

Metro’s expansion in the NCR:

The Delhi Metro has expanded its wings far and wide in the satellite cities of the NCR as well. While in Phase 2, the cities of NOIDA, Ghaziabad and Gurugram were added to the Delhi Metro network, in Phase 3, Faridabad has already been added while Bahadurgarh is all set to get Metro connectivity. Work is in progress on multiple stretches in NOIDA, Greater NOIDA, Ghaziabad and Ballabhgarh. With the opening of the Mundka – Bahadurgarh section, the total network outside Delhi will have spread to 39.332 kilometres with 27 Metro stations. Another 49.175 kilometres of new lines with 36 stations (including NOIDA – Graeter NOIDA corridor) is being built right now.

GOVERNMENT OF INDIA
MINISTRY OF RAILWAYS
RAILWAY BOARD

Sub: Train Captain as overall leader and in-charge of all on board railway Personnel and outsourced staff

Long distance Mail/Exp trains have a large group/team of railway personnel and outsourced staff on board for offering various services to the passengers and to provide maintenance on run. In order to introduce the concept of a single person/leader responsible for coordinating the entire team and facilitating all services during the complete journey of the train, it has been decided to introduce the concept of Train Captain.

2. In trains like Rajdhani/Shatabdi/Duranto and other trains where a Train Superintendent (TS) is on end to end basis, TS shall be nominated as “Train Captain” and made responsible for all the facilities on train. He/she should be provided with a badge of Train Captain to be worn on the uniform. All on board railway personnel and supervisors of all outsourced agencies shall report to the Train Captain for effective control and supervision to ensure improvement in on-board services offered by Railways. Zonal Railways shall issue necessary directives to all on board staff to ensure strict compliance of directions of the Train Captain to address the issues concerning complaint free travel of passengers failing which action may be initiated against the staff not following directions of the Train Captain.

3. In all other trains, where TS is not present, zonal railways may nominate the senior most Ticket checking staff as Train Captain, who will wear the badge of Train Captain and shall be responsible for all facilities in the train as mentioned above. This badge will be handed over to the senior most ticket checking staff of the next leg of journey who will then act as Train Captain till the next leg and so on. The Train Captain must be provided with the mobile number of the on board staff so that he/she is able to contact them when their services are required.

This issue with the approval of Board (MT and CRB).

Ministry of Railways have decided to change the name of Train No. 19707/19708 Aravali Express running between Bandra Terminus and Jaipur to “AMRAPUR ARAVALI EXPRESS” with immediate effect.

South Central Railway is now 100% LED Lighting at all Stations

South Central Railway First Zone on Indian Railways to provide 100% LED Lighting at all Stations. Service Buildings and Residential quarters covering the entire Zone by replacing 2,99,708 number of conventional lights with LED lights. This would result in saving of 82 lakh units of electrical energy amounting to Rs.7 crore per annum. It will also reduce carbon emission by 7,372 tonnes per year. 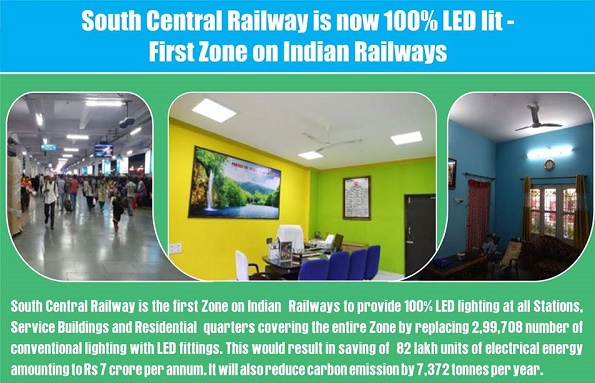