Central Railway will operate Mega Block on its suburban sections for carrying out maintenance work on 2.10.2022.

Dn fast services leaving Chhatrapati Shivaji Maharaj Terminus Mumbai from 10.25 am to 3.35 pm will be diverted on Dn slow line between Matunga and Mulund halting at stations as per their respective schedule. Fast trains beyond Thane will be re – diverted on Dn fast line at Mulund and will arrive destination 15 minutes behind schedule.

However, special local trains will run between Chhatrapati Shivaji Maharaj Terminus Mumbai and Vashi during the block period.

Transharbour line services will be available between Thane – Vashi / Nerul stations during the block period.

Suburban train services between Belapur / Nerul – Kharkopar will run as per schedule during the block period.

These maintenance mega blocks are essential for infrastructure upkeep and safety. Passengers are requested to bear with the Railway Administration for the inconvenience caused.

Salient Features of the new suburban Time – Table of Western Railway are as under:-

Hon’ble PM Shri Narendra Modi will flag off the ‘Make in India’ Vande Bharat Express which will be running between Gandhinagar Capital to Mumbai Central. 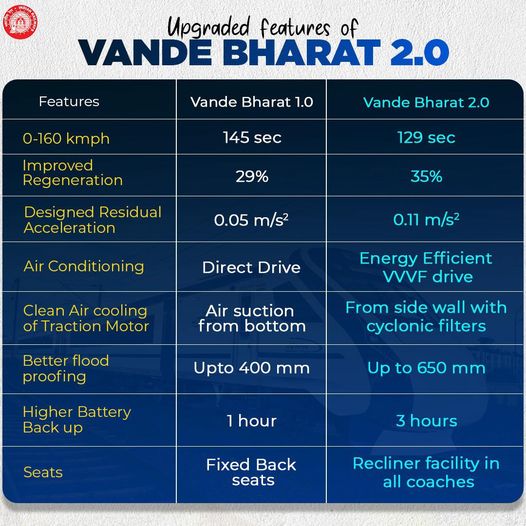 All equipped with the latest technologies, the Vande Bharat 2.0 Trains are here to provide you a comfortable Passenger experience.

The Prime Minister, Shri Narendra Modi flagged off Gandhinagar- Mumbai Vande Bharat Express at Gandhinagar station and travelled on the train from there to Kalupur Railway Station today.

When he arrived at Gandhinagar station, the Prime Minister was accompanied by Chief Minister of Gujarat, Shri Bhupendra Patel, Governor of Gujarat, Shri Acharya Devvrat, Union Minister of Railways, Shri Ashvini Vaishnav, and Union Minister of Housing and Urban Affairs, Shri Hardeep Singh Puri. The Prime Minister inspected the train coaches of the Vande Bharat Express 2.0 and took stock of the onboard facilities. Shri Modi also inspected the control centre of the locomotive engine of Vande Bharat Express 2.0.

The Prime Minister then flagged off the new & upgraded version of Vande Bharat Express between Gandhinagar and Mumbai and travelled on the train from there to Kalupur Railway Station. The Prime Minister also interacted with his co-passengers including those from the family members of Railways staff, women entrepreneurs and researchers and youngsters. He also interacted with workers, engineers and other staff who toiled to make Vande Bharat trains a shining success.

Vande Bharat Express 2.0 between Gandhinagar and Mumbai is going to be a game changer and will boost connectivity between the two business hubs of India. It will enable business owners from Gujarat to travel to Mumbai and vice versa without bearing the brunt of high-cost airline tickets while availing facilities that are available on air. One-way travel time of Vande Bharat Express 2.0 from Gandhinagar to Mumbai is estimated at around 6-7 hours.

The Vande Bharat Express 2.0 offers a myriad of superior and aircraft-like travelling experiences. It is equipped with advanced state-of-the-art safety features including an indigenously developed Train Collision Avoidance System – KAVACH.

Vande Bharat 2.0 will be equipped with more advancements and improved features such as reaching the speed of 0 to 100 kilometres per hour in just 52 seconds, and a maximum speed up to 180 kilometres per hour. The improved Vande Bharat Express will weigh 392 tons when compared to the previous version of 430 tons. It will also have a Wi-Fi content on-demand facility. Every coach is equipped with 32” screens providing passenger information and infotainment compared to 24” in the previous version. Vande Bharat Express is also going to be environment friendly as the ACs will be 15 per cent more energy efficient. With dust-free clean air cooling of the traction motor, the travel will become more comfortable. Side recliner seat facility which was provided only to Executive Class passengers earlier will now be made available for all classes. Executive Coaches have the added feature of 180-degree rotating seats

In the new design of Vande Bharat Express, a photo-catalytic ultraviolet air purification system is installed in the Roof-Mounted Package Unit (RMPU) for air purification. As recommended by Central Scientific Instruments Organisation (CSIO), Chandigarh, this system is designed and installed on both ends of RMPU to filter and clean the air free from germs, bacteria, viruses etc. coming through fresh air and return air.

Railway Station is an important and central place for any city. Prime Minster Sh. Narendra Modi has given importance to stations development in the transformation of Railways. Today’s Cabinet decision gives a new direction to the station development. Work on redevelopment of 199 Stations is going on. Out of these, tenders have been issued for 47 stations. Master planning and design for the remaining is underway. Work is progressing fast for 32 stations. Today, the Cabinet has sanctioned investment of Rs.10,000 crore for 3 big stations, namely New Delhi, Chhatrapati Shivaji Maharaj Terminus (CSMT), Mumbai and Ahmedabad Railway Stations.

The standard elements of station design will be:

To clear the extra rush of passengers during ensuing Puja festival, Railway has decided to run one Puja Special train between Kolkata & Raxaul.

The above special train will stop at Naihati, Bandel, Barddhaman, Durgapur, Asansol, Chittaranjan, Madhupur and Jasidih stations enroute in both directions within Eastern Railway jurisdiction.

The booking of the Kolkata – Raxaul Puja Special (05507) will be available on & from 25.09.2022 through PRS & internet. In addition to mail / express fare, special charge will be realized for the puja special train. Concessional booking is not allowed. Tatkal Quota is not available.

For detailed timings at the halts of the above special trains, please visit www.enquiry.indianrail.gov.in or download NTES App.