No concession and Child fare shall be admissible in the above Vande Bharat Express trains. Only full fare adult tickets shall be issued. Other terms and conditions for booking, cancellation, refund, etc. shall be as per Shatabdi trains.

Advance reservation for the above Vande Bharat Express train service commencing from 12-11-2022 is open from Southern Railway end.

The inaugural special Vande Bharat Express from Mysuru to Dr.MGR Chennai Central will be flagged off by Shri. Narendra Modi, Hon’ble Prime Minister around 10:20 hours from KSR Bengaluru on 11th Nov, 2022. This inaugural special train will stop at almost all enroute stations for the benefit of everyone living in the town/city to see the Vande Bharat Train manufactured in ICF, Chennai, Tamil Nadu. The premium train service symbolizes the future of rail travel in the country with its state-of-the-art facilities, advanced safety technology, thus redefining travel experience.

To run six days in a week

The introduction of the train will help boost tourism in the region and provide a comfortable and faster mode of travel. The travel time from Una to New Delhi will be reduced by two hours. Running from Amb Andaura to New Delhi, it will be the fourth Vande Bharat train to be introduced in the country and is an advanced version compared to the earlier ones, being much lighter and capable of reaching higher speeds in a shorter duration. Vande Bharat 2.0 is equipped with more advancements and improved features such as reaching a speed of 0 to 100 kilometres per hour in just 52 seconds, and a maximum speed of up to 180 kilometres per hour. The improved Vande Bharat Express will weigh 392 tons when compared to the previous version of 430 tons. It will also have a Wi-Fi content on-demand facility. Every coach has 32” screens providing passenger information and infotainment compared to 24” in the previous version. Vande Bharat Express will also be environmentally friendly as the ACs will be 15 per cent more energy efficient. With dust-free clean air cooling of the traction motor, travel will become more comfortable. A side recliner seat facility provided only to Executive Class passengers earlier will now be made available for all classes. Executive Coaches have the added feature of 180-degree rotating seats

In the new design of Vande Bharat Express, a photo-catalytic ultraviolet air purification system is installed in the Roof-Mounted Package Unit (RMPU) for air purification. As recommended by Central Scientific Instruments Organisation (CSIO), Chandigarh, this system is designed and installed on both ends of RMPU to filter and clean the air free from germs, bacteria, viruses etc. coming through fresh air and return air.

The Vande Bharat Express 2.0 offers a myriad of superior and aircraft-like travelling experiences. It is equipped with advanced state-of-the-art safety features including an indigenously developed Train Collision Avoidance System – KAVACH.

The Timings and stoppages of Vande Bharat Express are as under:

GOVERNMENT OF INDIA
MINISTRY OF RAILWAYS
RAILWAY BOARD

There shall be no change in other terms and conditions of CC 11 of 2022.

This issues with the concurrence of Finance Directorate of Ministry of Railways.

Trial of the coach has been successfully completed

These coaches is having passenger capacity of 83 berths

This is a new variant of LHB AC three-tier coach with features enumerated as below:-

Indian Railways has always been committed to the convenient travel of its passengers by developing coaches with improved passenger friendly features. The new entrant to this developmental journey of Indian Railways is AC Three Tier Economy Class Coach. The new coach has started to offer its service from today. First time, the coach has been attached to Train No.02403 Prayagraj- Jaipur Express. The new AC Economy coach has 83 berths as compared to 72 berths in 3AC Coach. Also, the fare structure for this coach is 8% lesser than 3AC Coach. 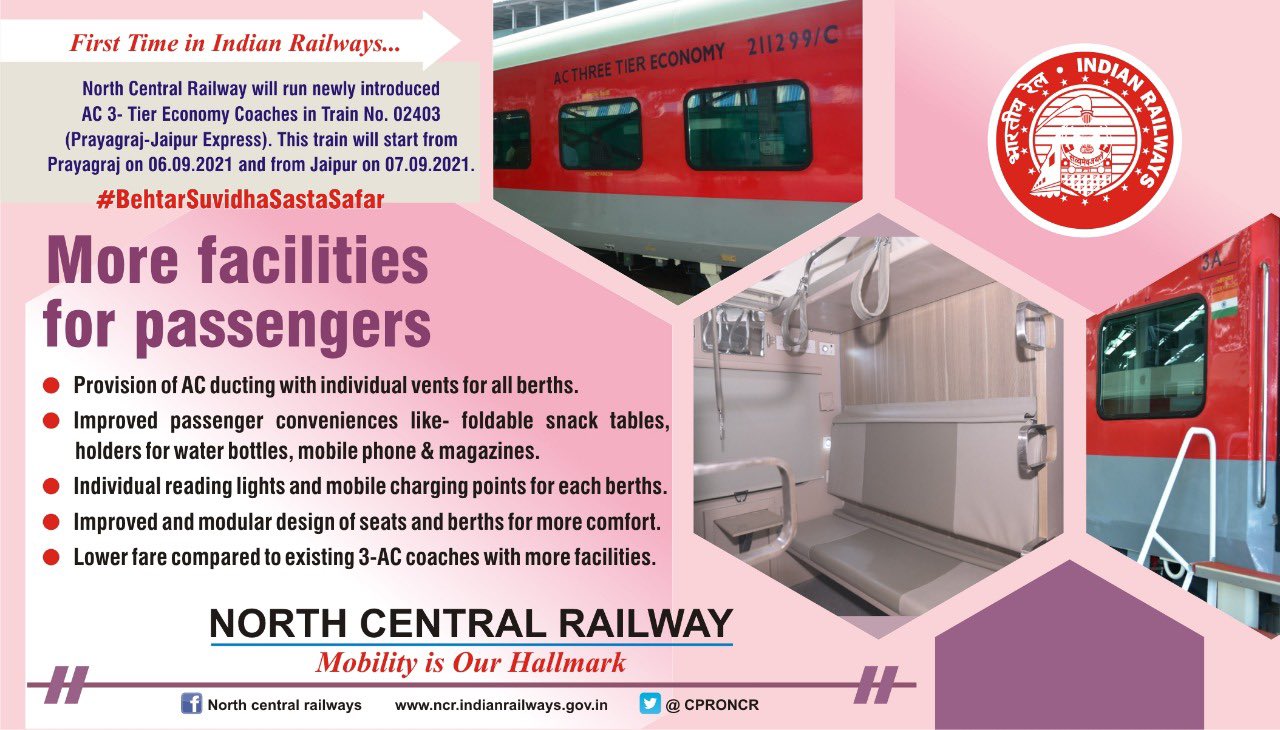 Provision of entry into the coach and disabled friendly toilet in a wheel chair has been made, which is a new initiative.

Several design improvements have also been made for improving passenger comfort. Redesign of the AC ducting has been made by providing individual vents for all berths. Improved and modular design of seats and berths have been made to improve comfort, reduce weight of the coach and improve maintenance friendliness.

Improved passenger conveniences has been ensured in form of foldable snack tables in both longitudinal and transverse bays, injury free spaces and holders for water bottles, mobile phone. Individual reading lights and USB charging points are provided for each berth. A new ergonomically improved design of ladder for accessing the middle and upper berths has been provided too. There is a increased headroom in the middle and upper berths.

The toilet area has improved design of the Indian and the Western style lavatories. Public address and passenger information systems have also been installed as a part of passenger facilities in these coaches.

Ambience and ease of access into coach has been improved by aesthetically pleasing and ergonomic entrance. The interior of the coach has luminescent aisle markers, illuminated berth indicators integral with night lights with luminescent berth numbers.
There is also improved fire safety by ensuring compliance to world benchmark of EN45545-2 HL3 for materials, thus meeting the high requirements of the new fire protection standard. 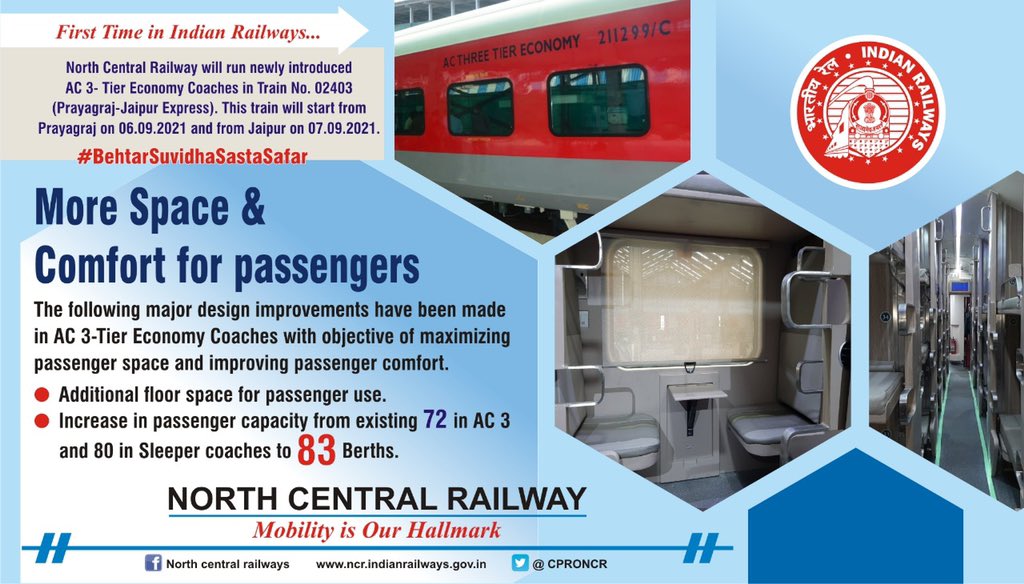