The Government of India had set up the 4th Fare Fixation Committee in May-2016 to recommend the fares of Delhi Metro as per the provisions of Delhi Metro Rail (Operation & Maintenance) Act, 2002. The FFC is a three member committee chaired by an existing and/or a retired judge of High Court and one representative each at the level of Additional Secretary from the Central Government & the State Government.

The members of the 4th FFC were as under:

The highlights of the revised fares are as under: 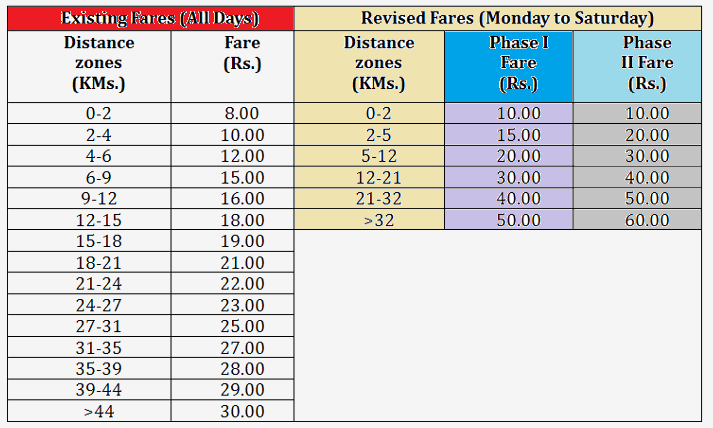 • With a view to encourage ridership on Sundays and National Holidays (26th January, 15th August and 2nd October) special discounted fares have been approved. These are as under: 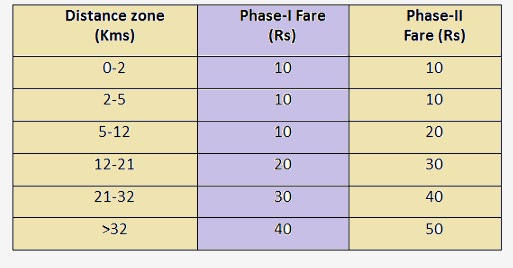 • 10% discount to be continued on every journey made by the passengers using Smart Card.

• To avoid overcrowding during peak hours, an additional 10% discount will be given to the passengers using Smart Card who exit from metro system during off peak hours based on the following time zones:

• The above discount is applicable from Monday to Saturday (weekdays) only. Thus, in all a passenger may avail 20% discount on smart card while travelling during the off-peak time.

• There shall be no change in the fares of Airport Express Line.

• This is fourth time since the beginning of its operations in 2002 that Delhi Metro is revising its fares. When Delhi Metro started operations on 25th December 2002, the minimum fare was Rs. 4 and maximum was Rs. 8.

• The 1st fare fixation committee was constituted in December 2003 and revised fares were adopted w.e.f March 31, 2004 (after a gap of one year and three months) with minimum fare of Rs. 6 and maximum Rs. 15.

• The fares recommended by the 2nd fare fixation committee were made effective form 31st December 2005 (after a gap of one year and nine months) with minimum fare of Rs. 6 and maximum Rs. 22.

• The 3rd fare fixation committee was constituted in June 2009 and fares were made effective from November 13, 2009 after a gap of 4 years (approx) with minimum fare of Rs. 8 and maximum Rs. 30.