Plan Your Summer Holidays with 216 Special Trains on Konkan Railway

Konkan Railway is engaged in train operations between ROHA – MANGALORE for a stretch of 740 kms since 1998. Konkan Railway is playing a key role in the integrated development of tourist destination on the picturesque beaches of Goa. In a region abounding in tourist destination, Konkan Railway acts as a catalyst for growth attracting both domestic and foreign tourist. A train ride through the valleys or mountains on Konkan Railway allowing tourists to pack more in their limited vacations. Konkan Railway has opened new frontiers for Indian tourism as the places of tourists interest on the Western coast now have better access. Breathtaking pristine beauty and variety of magnificent sites greet one all along Konkan Railway route. The West Coast offers tremendous variety-hill stations historical forts-both on land and sea, sun kisses beaches, pilgrim centers, refreshing greenery. In the vacations, there is a huge rush of natives of Konkan as well as tourists who planned their visits for beautiful Konkan region.

Hon’ble Minister for Railways Shri Suresh Prabhu has understood the growing demand and expectation of travelling public during the summer vacation. Under the his able guidance and leadership, Konkan Railway in coordination with Zonal Railways has announced running of 216 summer special trains to clear the extra rush of passengers during period from April to June 2017 as compared to 168 trains in the corresponding period of last year.

Konkan Railway always believes in providing better services to fulfil the expectations of the passengers travelling over Konkan Region.

The details of Special Trains are as under – 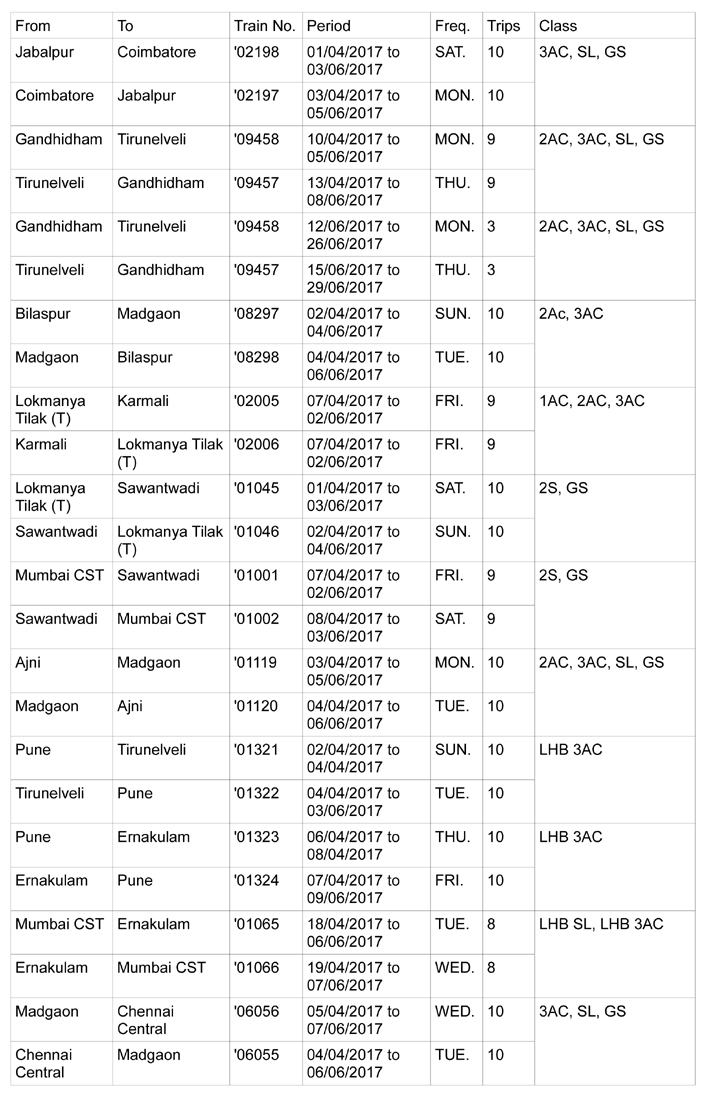