Ministry of Railways,
Government of India 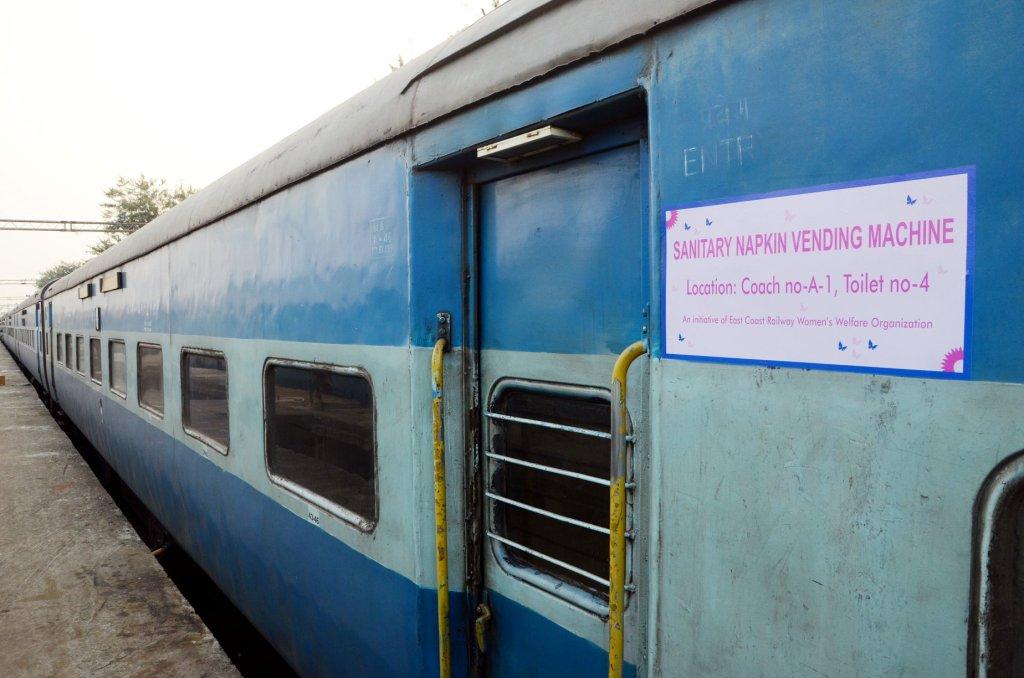 On successful acceptance and positive response from women passengers after installation of Automatic Sanitary Napkin Vending Machines in Hirakhand Express and keeping in view the demand from the passengers, East Coast Railway has extended this facility to important trains originating from its jurisdiction. This initiative is a part of ECoR’s drive to improve sanitation and hygiene and a humble service to enhance the goodwill of the people for Railways and also a step towards promoting Swachh Rail – Swachh Bharat. Total 91 Machines have been installed in 36 Trains

In this connection, an inaugural function was held at the new concourse of Dr. MGR Chennai Central Railway Station, today. Smt. B. Krishnaveni Chalam, Secretary / SRWO and Smt. Punitha Sridhar, First Lady, Rotary International presided over the function as the Chief Guest and handedover the Napkin Vending Machines for usage of the public.

These Vending machines are coin operated and will dispense the sanitary napkin to the user by inserting a Rs.5 coin into it.
Napkin Vending Machines sponsored by Southern Railway Women’s Organization – Chennai Division and GEO India Foundation are installed at three major railway stations viz.,

Dr. MGR Chennai Central, Chennai Egmore and Tambaram. These machines were installed at the women rest room of these stations in order to provide comfort and ensure easy access to sanitary napkins for better menstrual health and hygiene of women passengers.

GOVERNMENT OF INDIA
MINISTRY OF RAILWAYS

1914 Dr. Banda Prakash
Will the Minister of RAILWAYS be pleased to state :-
(a) whether Railways plan to introduce new disposable pillow covers and napkins to improve passenger amenities and hygiene standards in trains;
(b) whether a CAG report mentioned that unhygienic condition of blankets, used by several railway passengers during their train journey, was caused because of not washing them for up to six months, even through the directive is to wash them every one or two months; and
(c) if so, the details thereof along with the steps taken to enhance passenger amenities as well as cleanliness?
ANSWER

MINISTER OF STATE IN THE MINISTRY OF RAILWAYS (SHRI RAJEN GOHAIN)

(a) Disposable napkins have been introduced in AC Coaches in place of hand / face towels on cost neutrality basis. However, there is no such plan for introducing disposable pillow covers.
(b) & (c) As per earlier instructions, blankets were required to be dry cleaned or washed once in two months. CAG in its report no. 14 of 2017 has mentioned that at a few depots, blankets were not dry cleaned and/or sanitised as per schedule.
Specifications of blankets for AC coaches have been recently reviewed and improved, washing frequency increased to once in a month, and their service life reduced from 4 years to 2 years, with aim to provide cleaner and more hygienic blankets to passengers.
Some of the other major initiatives taken by Indian Railways towards improvement in passenger amenities and cleanliness in trains are as follows :
(i) Upgradation of coaches including toilets in identified rakes of existing trains under Project Swarn and Project Utkrisht, and introduction of improved passenger services such as Humsafar trains and Antodaya trains.
(ii) Provision of dustbins is being done in non AC coaches also in addition to the AC Coaches.
(iii) Provision of health faucets in all new AC and non-AC coaches, in addition to mug with chain arrangement.
(iv) Pace of installation of Bio-toilets in Coaches has been intensified. It is planned to install bio-toilets in the entire BG coaching fleet of Indian Railways by 2019.
(v) Cleaning of coaches, including toilets, is done at both ends including mechanised cleaning through professional agencies at around 145 coaching depots.
(vi) On Board Housekeeping Service (OBHS) has been provided in more than 1050 pairs of trains including Rajdhani, Shatabdi and other important long distance Mail/Express trains for cleaning of coach toilets, doorways, aisles and passenger compartments during the run of the trains.
(vii) ‘Coach Mitra’ facility has been introduced in about 1000 pairs of OBHS trains. ‘Coach Mitra’ is a single window interface to register coach related requirements of passengers such as cleaning, disinfection, linen, train lighting, air conditioning and watering of coaches.
(viii) To improve the quality of washing of bed linen, mechanized laundries have been set up at 57 locations in the railways.
(ix) Pest control treatment of coaches and rodent control measures are regularly done as per schedule.