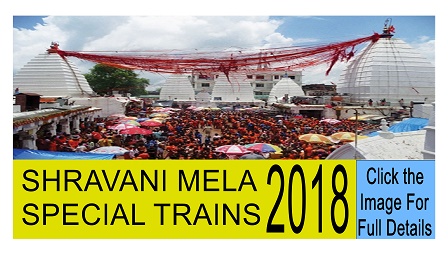 With a view to clear extra rush of Pilgrims during Shravani Mela, South Eastern Railway has decided to run Special Trains between Tatanagar-Jasidih-Tatanagar during the period from 10/07/17 to 08/08/17.

In the return direction, the special train (Train No.08184) leaving Jasidih at 11.10 hrs. daily (except Wednesday & Saturday) will arrive Tatanagar at 17.30 hrs, the same day.