To make travel experience more comfortable, Western Railway has decided to replace the conventional rake of Train No. 12903/04 Mumbai Central – Amritsar Golden Temple Mail with LHB rake, which is presently running as Train No 02903/02904 Special Train.

According to a press release issued by Shri Sumit Thakur- Chief Public Relations Officer of Western Rly, the conventional rake of Golden Temple Mail will run with LHB rake instead of conventional rakes with effect from 15.09.2020 from Mumbai Central Terminus and 17.09.20 from Amritsar. The train will comprise of First AC, AC 2-Tier, AC 3-Tier, Sleeper Class and Second Class General coaches. It will not o­nly provide comfort to the passengers, but will also ensure to increase their safety.

Installation of Display Boards and Announcement Machines in Passenger Trains

At present, announcement in premium trains like Rajdhani and Shatabdi is being made about the next stations. The system is also being used for playing instrumental music and latest news.

For the assistance of visually impaired passengers, Integrated Braille signage, i.e., signage superimposed with Braille scripts, are being provided in the newly manufactured coaches of Indian Railways. Retrofitment of the same in existing coaches has also been taken up in a phased manner.

Recently, trial specifications have been developed by Research Designs and Standards Organisation (RDSO) / Lucknow for GPS based Public Address System and Passenger Information System for Linke Hofmann Busch (LHB) coaches. Trials will now be conducted to assess the performance on coaches.

This information was given by the Minister of State of Railways Shri Rajen Gohain in a written reply to a question in Rajya Sabha today. 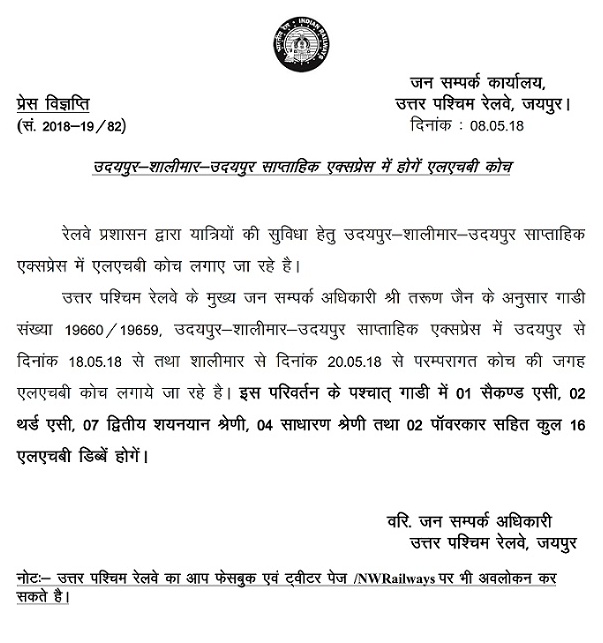