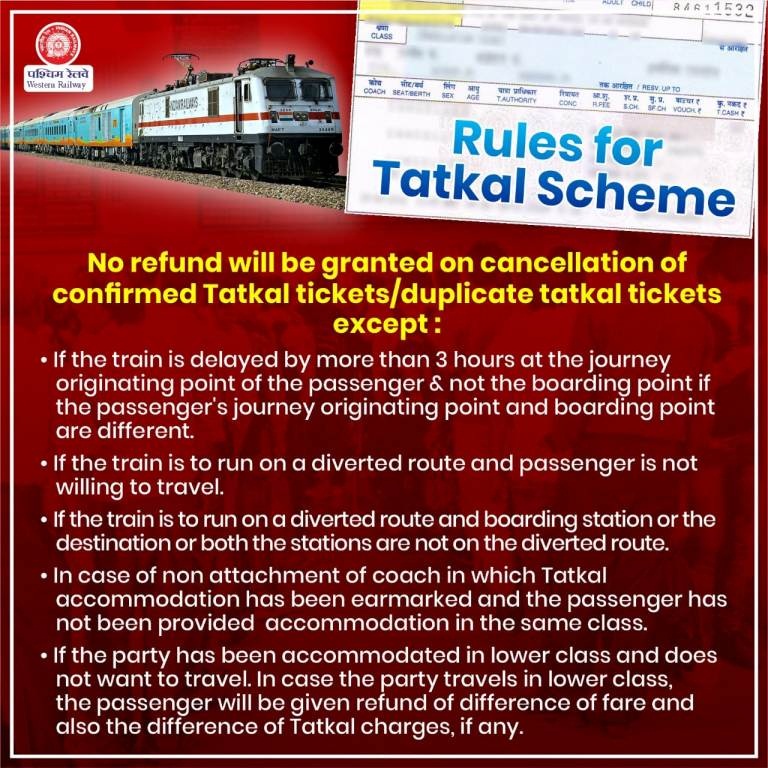 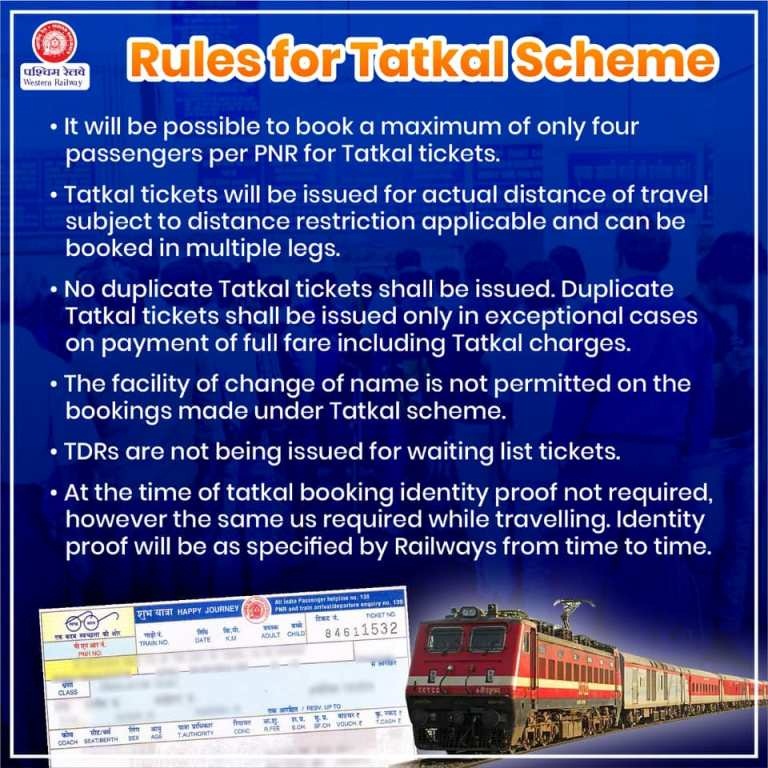 With a view to provide reservation to those passengers who have to undertake journey at short notice and to save such passengers from the clutches of unscrupulous elements / touts, Tatkal Reservation Scheme was introduced in 1997.

The Salient features of this scheme as on date are as under:

c. The facility of change of name is not permitted on the bookings made under Tatkal scheme.

ii. If the train is to run on a diverted route and passenger is not willing to travel.

iii. If the train is to run on diverted route and boarding station or the destination or both the stations are not on the diverted route.

iv. In case of non attachment of coach in which Tatkal accommodation has been earmarked and the passenger has not been provided accommodation in the same class.

i. Tatkal tickets are issued subject to the applicable distance restrictions.

j. All authorised ticketing agents of Indian Railways / IRCTC have been restricted from booking Tatkal tickets between 1000 hours and 1015 hours for tickets in AC classes and between 1100 hours and 1115 hours for non-AC classes on the opening day of reservation.

k. It is possible to book a maximum of only four passengers per PNR for Tatkal tickets.

l. The web services agents of IRCTC have been permitted to book only one Tatkal ticket per train per day on the internet.

m. Powers for earmarking of Tatkal accommodation in different classes have been delegated to Zonal Railways who take a decision in this regard keeping in view the utilization pattern in that class during the previous financial year as well as availability of accommodation. The accommodation so earmarked, however, in no case exceed upto maximum of 30% of capacity of coach depending on the utilization of this quota during the last 6 month period.

n. Out of the total berth potential of around 15.14 lakhs berths / seats per day on an average, around 3.05 lakh seats / berths are available for booking under Tatkal / Premium Tatkal every day i.e. approximately 20.16% of the total accommodation.

o. Instructions have also been issued to zonal Railways to introduce Tatkal scheme in the passenger trains in that train / class in which average utilisation during the previous financial year has been more than 60%. The minimum Tatkal charges prescribed for different classes will be applicable as flat Tatkal charges. All other conditions applicable to normal Tatkal scheme will be applicable in case of identified passenger trains.

Source: TRAINS AT A GLANCE